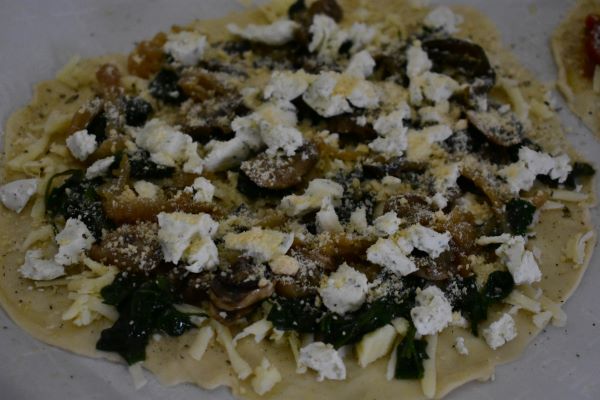 I did a post called one foot in 1943 and one foot in 2022 and I showed a Pizza that I had made using dehydrated vegetables and mentioned that Pizza was not common during 1943 here in the United States, especially in the southern United States. After more searching I did find a 1935 article from New York about Pizza Pie and found that in New York and New Jersey, Pizza was starting to be made in the United States.  I found one article that was 1935 and talked about an Italian Pizza Pie.

Then, I had a blog reader to send me an email to say she had seen pizza being described as Tomato Pie.  So off I went to find the Pizza or Tomato Pie.  This lead me on to new information about Pizza and Tomato Pie.  Thank you Lynda.

So what I found is that during the time of our history study of 1943 and before 1943 New places were opening up in the United States that made pizzas but only in certain parts of the country.  Then I found an article that talked about Pizza and in the state of Alabama.  But let us take a look first at the Tomato Pie because it had been around longer.

So above is a sweet Tomato Pie.

Below is 1945 where many people did not know how to pronounce Pizza or understand what it was.  But let a Teenager taste a pizza and that would be all it would take to spread the word. :)

Continued to the article above....cheese or add anchovy to tomato filling.

I kept thinking if Lynda saw something about Tomato Pie that connected to Pizza and I must be missing something.  I went back to research some more.  Then I Found this above.  1939

Today, tomato pies, are a sweet or savory pie and we know a Pizza is a thin or deep crust bread type dough or some people use a cracker or cauliflower crust.

I found a savory tomato pie from our real modern time and it is made in a baked pie crust (in a pie pan) , a layer of cheese over the warm baked pie crust, a layer of sliced tomatoes that have been salted and drained to get the liquid out of the tomatoes, a mixture of cheddar and mozzarella tossed into a cup of mayonnaise and spread over the layers of tomatoes.  Also Basil and chopped green onion is sprinkled over the layers.  Bake in a 350 degree oven for half hour.    Here is a link to Paula Deen's Savory Tomato Pie.  https://www.pauladeen.com/recipe/savory-tomato-pie/

I thought you might be interested in a little food history and since Tomato Pie was around in 1943, I may just have to make one. :)  but which one?   I know what Charles would say, " Make all of them and I will let you know which one is the best".  Grandma Donna