There have been many questions asked since starting the posting of the diaries. Edith's and Sarah's diaries especially.

I too have questions and it makes me research further. When I first started this history project this year I really did not expect to find much new information about the home life in the past but to our surprise we have found much more information than we expected.

We have to consider the time and what they did and did not have compared to our way of living today.

As we read Sarah's diary she mentions her morning tasks and her evening tasks. She refers to these tasks before breakfast or dinner or supper. So what was Sarah doing? It all depended on where Sarah lived, rural or in town. It seems by my research that they farmed very close to town. Also one of their sons and daughter in law lived next to them.

They had chickens so she may have gathered the eggs in the morning or let the chickens out. She most likely heated water because she refers to preparing the water. I do not know if they had running water, she may have had a hand pump. They could have had running water but also a good chance they did not.  She also heats the wash water. Do they have a bathroom as we know it? Possibly there is a chamber pot for nighttime that needs emptying. She may have a wood burning stove or coal and have to tend the stove before anything can get done.

Sarah mentions her cook range so I looked up ranges from 1915 to 1932 the date of her diary and she lived in the same house that she did when she married so the cook ranges sold during that time were coal, wood and oil, the old cast iron types. Sarah married in 1893 and when she died in 1950 she still lived in the house she moved into when they married. Most likely that stove was coal or wood.

She does not talk about what her tasks are as she does her household chores. She does mention what she cooks but not much about breakfast.

My mother in law would always get up ahead of others early in the morning to get the wood burning cook stove going. She had a large bowl of flour she kept to make biscuits every morning and she would work up the biscuits in the center of that one bowl, start to finish and put the lid on it and it was ready for the next day. She did this automatically. There were farm chores that the others did such as milking the cow at daybreak.

People that lived in the cities lived differently. But we know that Edith or Sarah did not live in a big city.

It seems that Sarah collects news for their small town and sends it off to a larger newspaper or something like that. 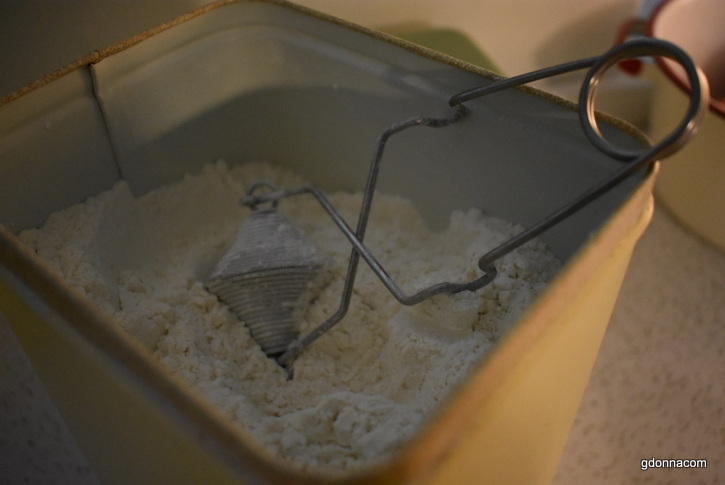 I do know that they have a grinder and grinds their grains because they grind corn for the chickens. 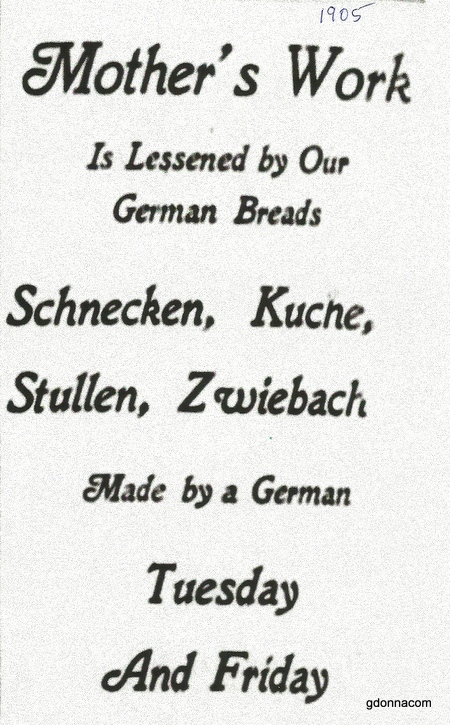 Several questions about Kuche. Every Saturday Sarah bakes bread and Kuche. When we research Kuche our internet takes us to Kuchen. But Sarah calls it kuche. If we notice she makes it when she makes bread so it may be that it needs yeast or her sponge that she makes up which is her yeast mixture. Or what she uses to make the bread rise.

In this ad from the 1920s the word Kuche listed as a German bread. But she says bread when she bakes bread. 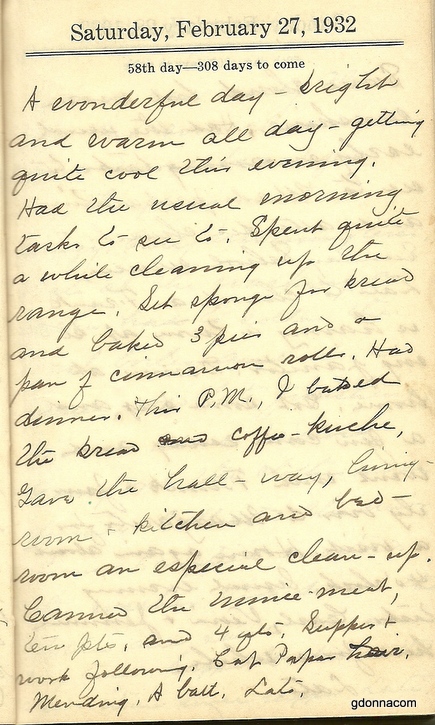 She normally says bread and Kuche but here above in her diary post on this day she says coffee-kuche. So is this a coffee cake? So I started digging deeper in research, this was difficult to find. 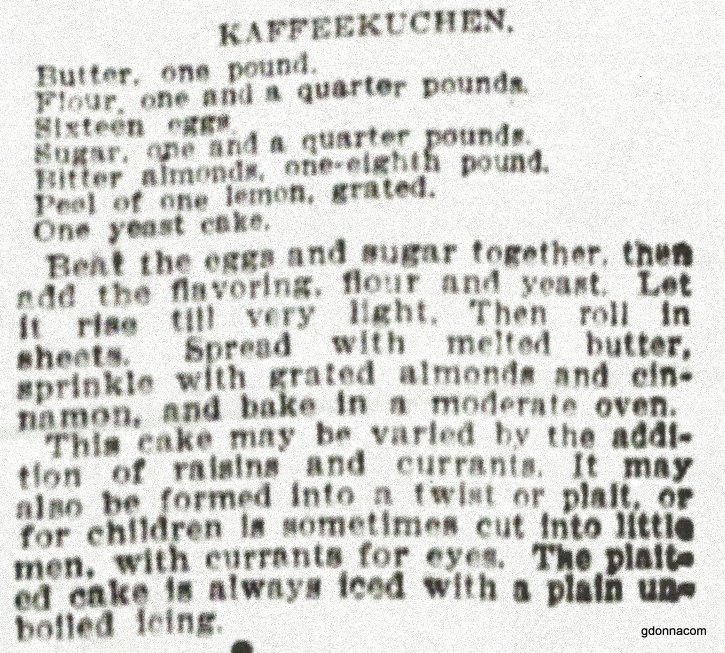 So is this what she was saying when she said coffee-kuche? Was it KaffeeKuchen? Their family was of German descent. Is this what Sarah baked when she also baked bread? This recipe above does use yeast so possibly this is Sarah's Kuche.  We can only guess. 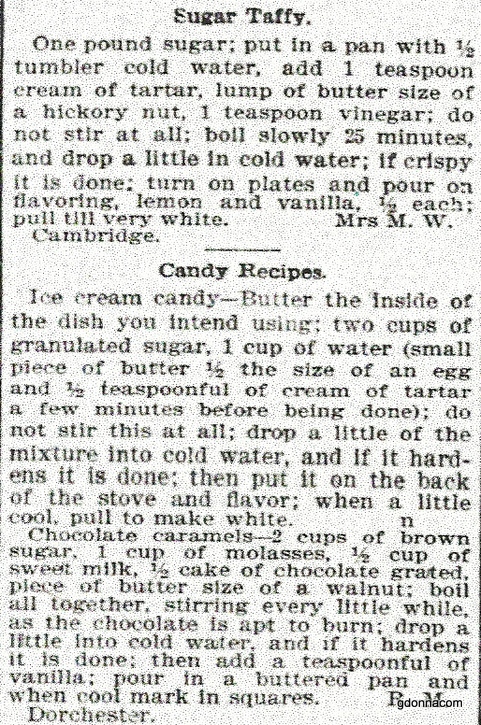 Also Sarah made ice cream candy. Now we know that Sarah trades in town so when she made the ice cream candy and wrapped it did she use it for trade? I think this is very possible because when I researched ice cream candy 1900 to 1932 there was a lot of advertising that they had ice cream candy. It was sold in stores and Sarah lived outside a small town. It was a very popular candy to purchase at a mercantile or small grocery. There were no supermarkets like we know today.

So the second recipe in the triple candy recipes above is Ice Cream Candy, under the taffy.  When we read Sarah's diary her candy did not turn out like she wanted so she had to boil it back down the next day so it would pull.

Well there were some supermarkets that had started in larger cities such as New York. Normally people would not pick out their food, they would go to a counter with a list and the store employees would gather your goods for you. Larger cities had started letting you carry a basket and take things off the shelves during the 1930's.

But it took a good while for people to change. Much was still ordered through catalog. I have an old food catalog from the 1920's. 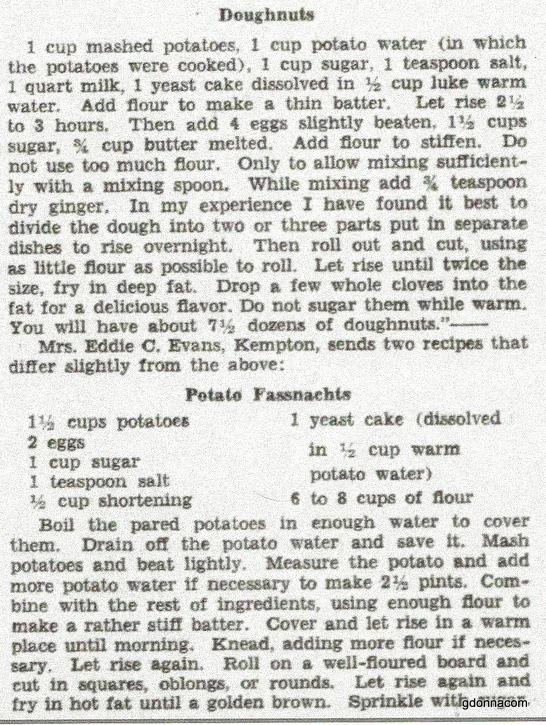 When Sarah made Doughnuts it was a big production because she often needed help making the doughnuts. We know by now that she works hard and does not get help very often, why does she make so many?  Does she take them to church the next day?  Does she use them for trade?  Do they just love doughnuts?  I thought  you would enjoy some of these very old recipes that were made during Sarah's time. 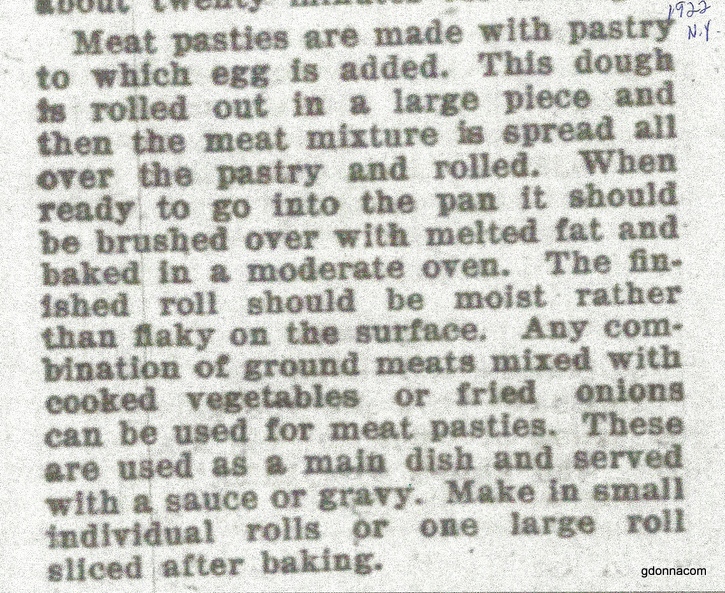 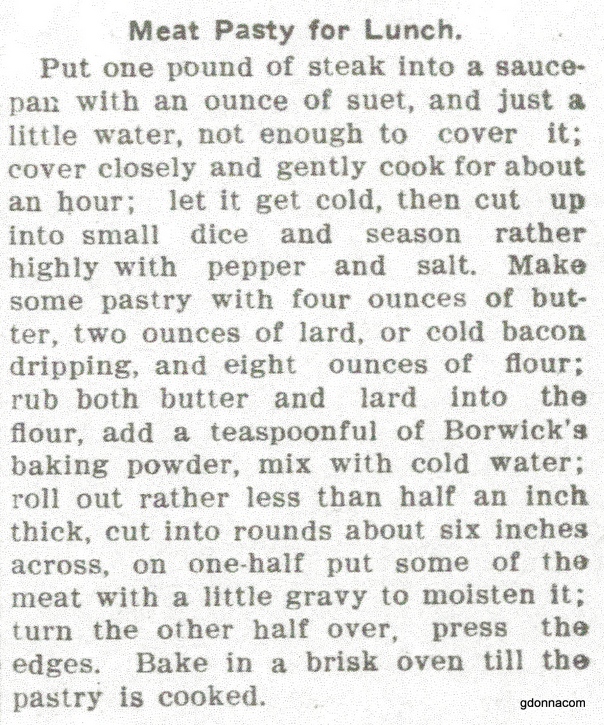 Back to some more questions,

For evening tasks it could be most anything that Sarah did, putting the chickens up before night. Turning back the beds,  Getting chamber pots ready. Pushing the coals back in the stove. Putting warm water in pitchers and bowls for washing up in the evening. Checking everything for safety so their are no fires.  Preparing things in the kitchen for the next morning. 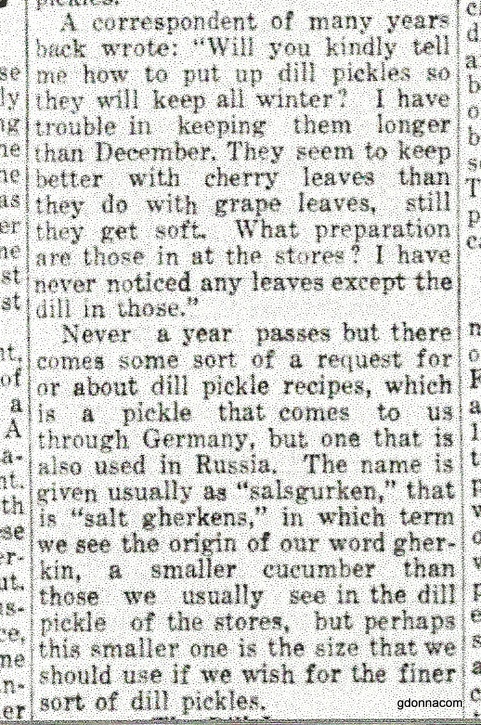 I was asked a very good question, how did Sarah get these pickles during winter?  As a child I remember pickles in a barrel but I am sure those pickles were different than the ones during Sarah's time.

I found many pickle recipes but they were not the ones that Sarah made. I posted this article to show that they knew that some people had pickles all winter like Sarah.  She probably kept them in a large crock or barrel and would go down and carefully lift the lid and pull some out and close it back up.

There were many different ways of food preservation depending on where one lived.  We have three family members of ours that live in three different states but remember the same method of preserving sausage and how it was cooked in patty form and then put in a crock and layer it with melted pork fat, another layer of sausage, more fat, more sausage, more fat etc.  They all said they kept a wood top on it or a cover with a brick or something heavy and when they needed the sausage they would remove what they wanted and then make sure the sausage below was completely covered with the fat.

There are many stories in our family about salting the meat.  I have no experience of this type of food preservation but it was done by our generations before us.

I feel that we would be in serious trouble should we have a very bad emergency in our country as we have little knowledge that our generations did before us.

Also we need to support our small farms around our area because we need them to not give up.

We will continue to read Sarah's diary, I feel I need to stick with one all the way through first and since I feel Sarah's is so important my efforts are to get her's typed out first.  As we read through Sarah's diary we will probably have more questions.

I do not type these very fast because I have to read the handwriting first. Scanning this many diaries is very difficult so that is why I have started typing them out.

I hope this explains some of your thoughts and questions. I do remember the out houses and carrying buckets for water in my past but only when visiting.

However when I was a young wife I did not have the luxuries I had before I left home.  I had no washing machine much less a dryer, I washed clothes by hand. No telephone of any kind, I wrote letters home. No television, not even a radio until later. I spent a lot of time cleaning and doing things the old way and I was very happy. We started with nothing, we worked our way up and to having many things that did not bring happiness but stress and now we are working our way back to a better time.  Grandma Donna

Around our home update