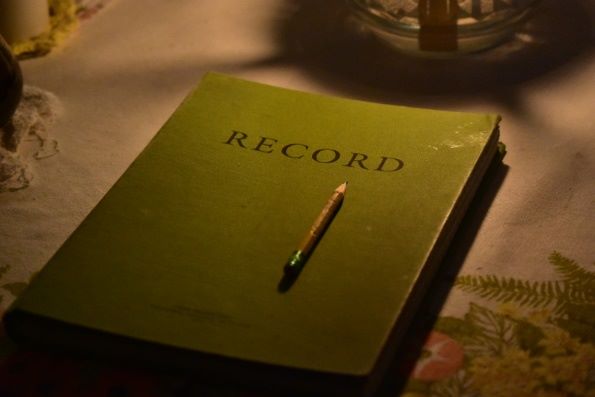 As some of you that follow my blog you will know that the first day of January 2019 we started a new history project and chose to live this year as if it were the year 1932.  When we study a certain year, we normally start off the first part of the year with much research material that I post about and we slowly fade off as we get busy living the year we are studying.

This record book is being used daily thanks to Charles steady routine of each morning doing his readings and recording how much water we have used and electricity, the temperature and humidity and notations of changes. 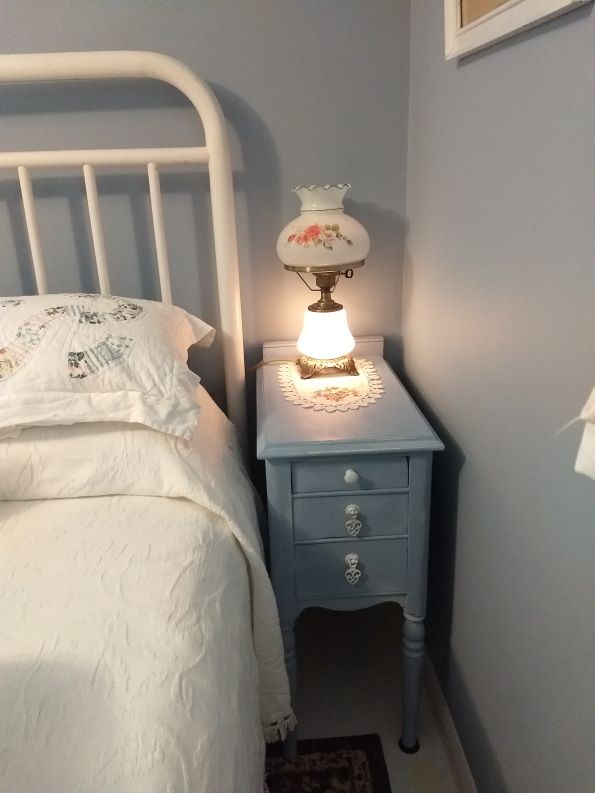 Often I feel that I fail the years study as my post do not always reflect this year in the past.  I basically start off good with good intentions and then fade off.

But there are things going on in the background and each year as we move back in time we take on new changes.  We get busy just living but we are still working towards a more simple life.

It does not always feel like a simple life because often it is very busy because doing things the old way takes a lot more effort. 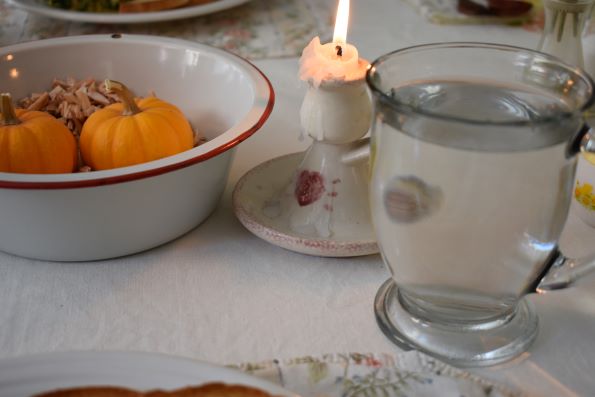 Often I look at some of the items we have and will say, well this certainly is not 1932 such as this glass mug. It is funny how the more modern things stick out as they are out of place instead of the other way around.  But they had clear glass in the past and I feel comfortable because I like this mug. 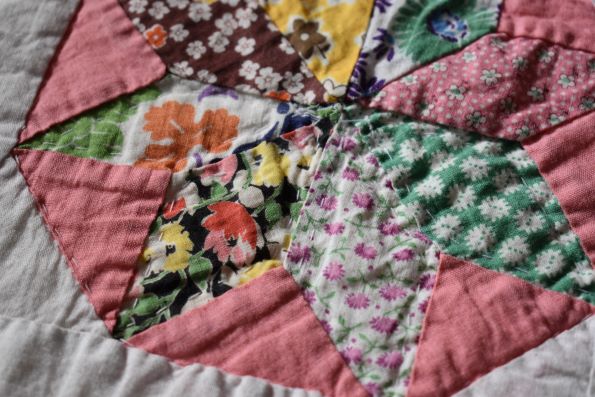 All these years now moving back in time to live like the past has been slow as it should be.  We have taken our time to find the items we want in our home.  I have a few quilts handed down from my family but one day I found this wonderful hand sewn quilt sitting on a shelf in a church thrift store. 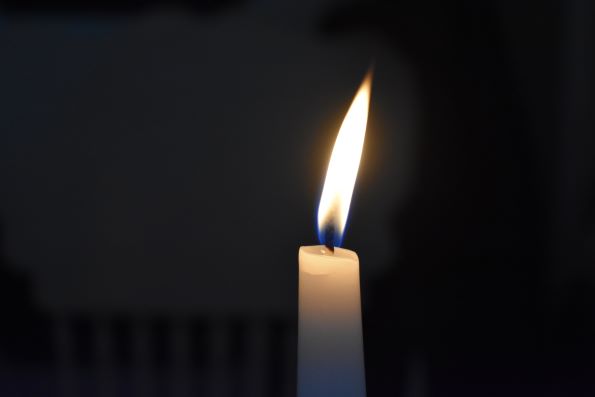 It all depended where we lived, rural or in a town. Charles and I have learned that most of our generations before us farmed or lived rural during this time. Some that lived in town had electricity and running water and some did not. It all depended where they lived and if telephone lines had been pulled to their area.  Some had radio and some had a telephone.  But many people, the average lived very simple and did not have these for many years to come.

I have done a poor job on getting them out. There have been reasons for this, computer problems, scanning and printing and such as that and typing has not been easy for me because I have some issues such as a lazy left hand due to a light stroke.

Charles keeps saying to me that he wants to help me to get Sarah's diary typed out but we keep running out of day.  I do believe I will be able to type it up eventually.

I bring up Sarah's diary as an example of how busy she is but in a way seems to live modern but when we study the diary they live rural with few modern conveniences.

A firewood cook stove, she boils water for hot water for dishes and laundry and bathing. She does have some type of washing machine because she mentions the washer on the porch and boiling water for laundry day. But that washer could be hand operated or gas motor etc. 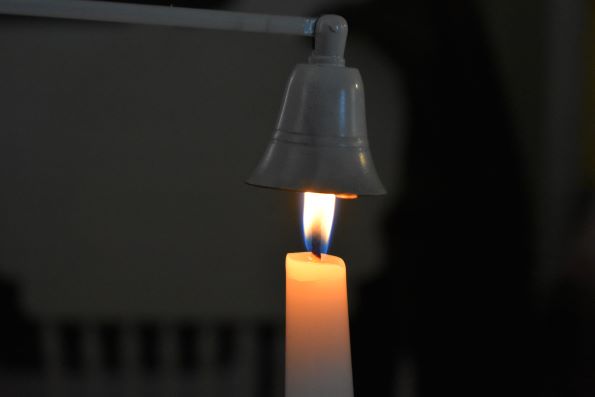 One cannot say, I am going to live just like 1932 or 1942 etc.  When we lived like 1943 that was time of war and people lived with rations. We had to decide, would we be living in a town or rural?  Did we have electricity and running water?  During the real 1942 my husbands family had several generations living together in the same house. 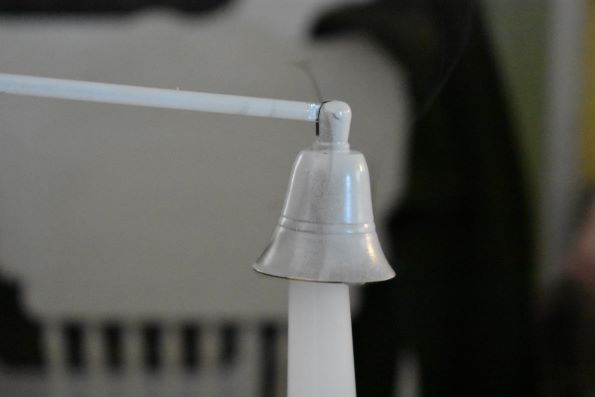 One thing I have learned is that since 1932 people have invented and made most any type of object many never necessary and people spend their hard earned money or go into debt. Much of that ended up in the dump and still does. 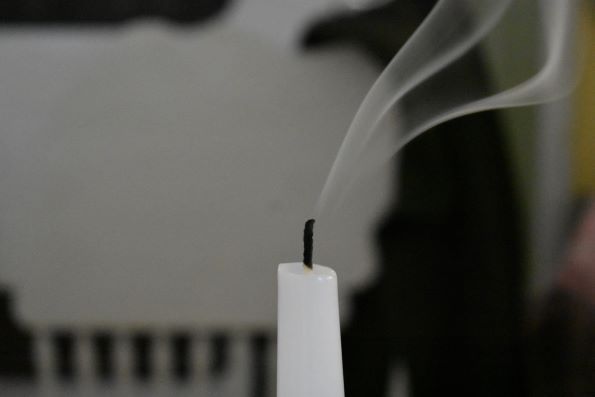 Little by little Charles and I have continued to find antique furniture pieces that cost very little due to their condition. Most pieces would have looked much nicer if cared for properly or stored properly but if they had we would have not been able to afford them

Charles can bring them back to have purpose again, what is important is that what is left and the wood that it was originally made from. We use these pieces daily and they replace modern items in our home that were made poorly or not real wood, metal etc. 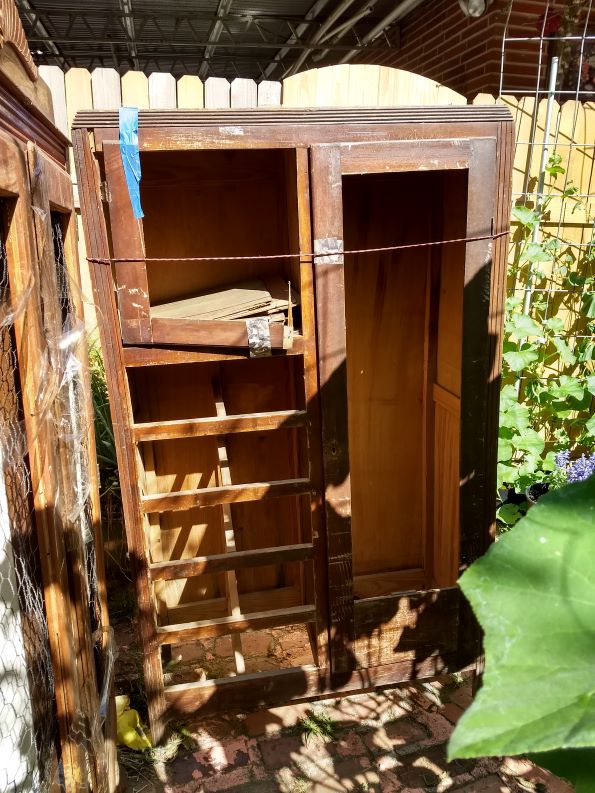 Earlier in the year we purchased two beat up, falling apart Chifferobe's at a yard sale for 25.00. I could see the history in them. Charles has been working on them off and on all year and have now finished both of them.

This above is before for Chifferobe one. 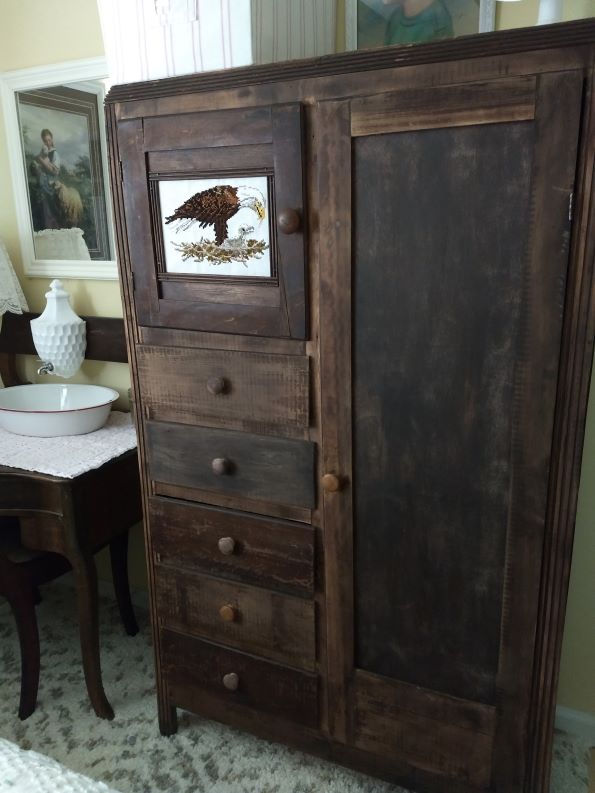 This is now finished. I have shown this one in a post recently. This is Charles Chifferobe. Amazingly the drawer parts were tied in a bundle of rope. Some of the wood had to be replaced or patched. Charles decided to leave it rustic. . We did not use the mirror and decided to use a cross stitch of an Eagle that Charles father did many years ago

This is the other chifferobe.  This is the one that I loved because of the ball feet and the fancy top piece still intact. This is before... 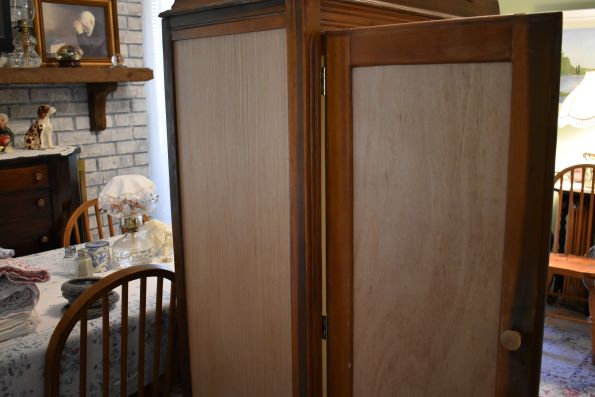 Charles had to replace the side wood, bottom and add wood to the front. Then we decided this one would be painted white. 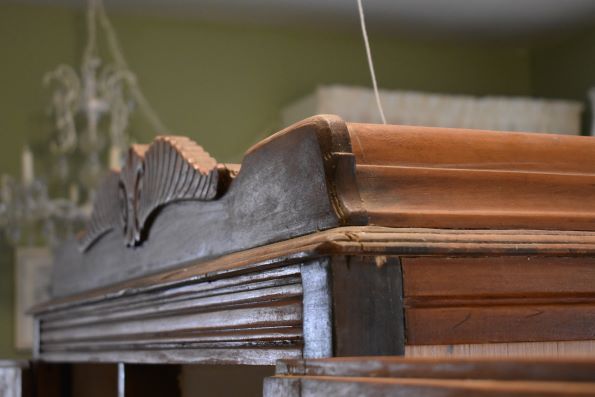 Part of me wanted to keep it original color but due to the difference in the new wood we did not. 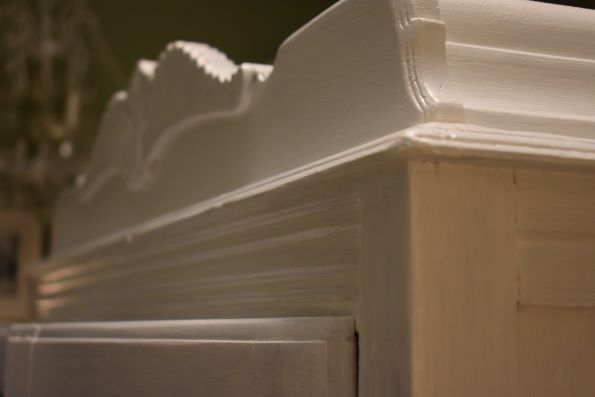 I would send you a full photo of it but I am having problems with my rotate on my computer and I need to turn my camera to get it full length.

I still have one more coat of paint to put on the doors but I am letting the coats that are on it now cure before putting anymore paint. 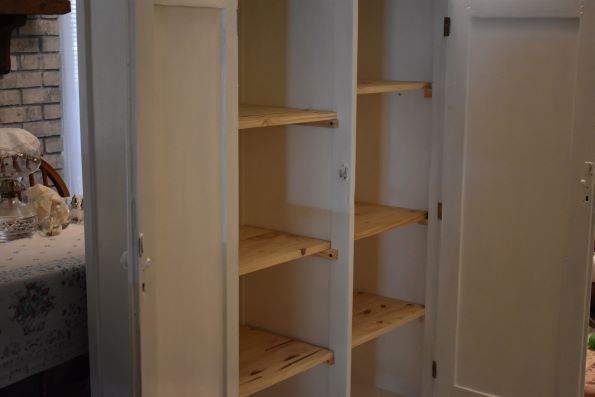 I left the shelving raw wood. The decision was made to use this piece as a fabric and sewing cabinet. This will free up another cabinet for another use. 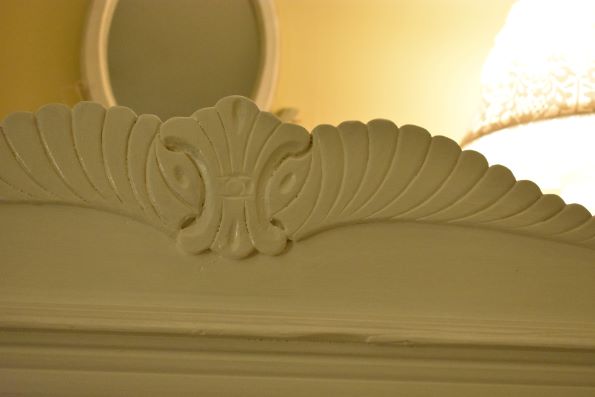 You just cannot go wrong with pieces from the past. 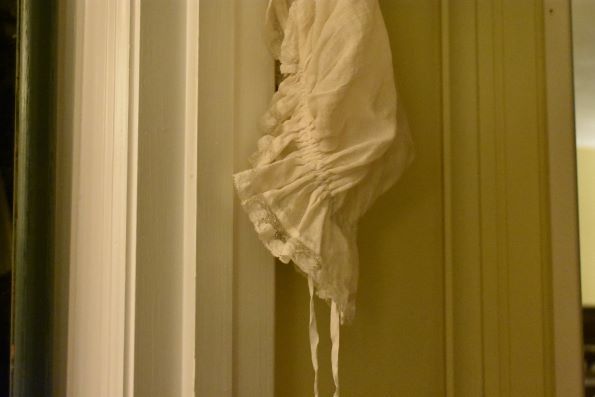 We are slowly getting there.  I continue to spruce up the trim work all over the house.  I have learned to get up off the floor make sure I am dragging a step stool around with me or I will most likely still be down there when Charles gets home. 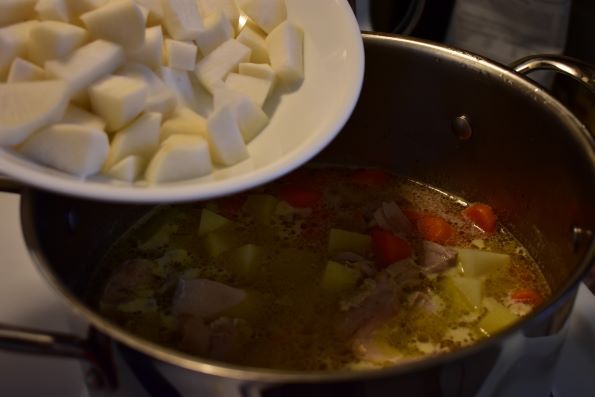 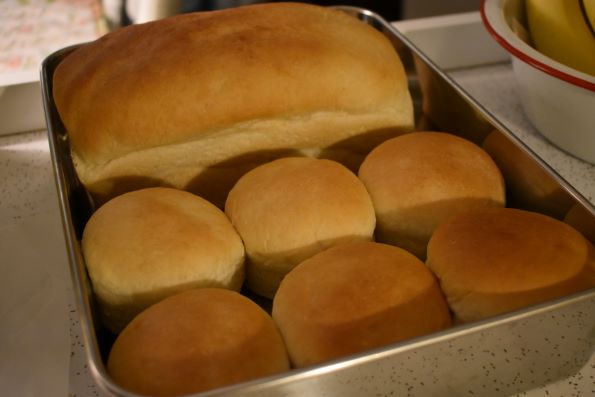 I don't make bread often now as we do not eat much bread anymore. But cold weather and stew calls for some homemade bread and rolls. 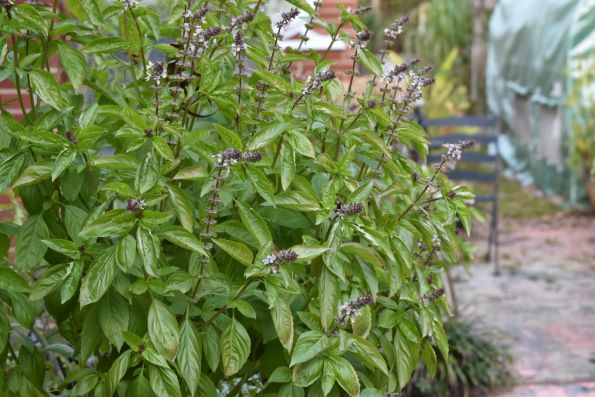 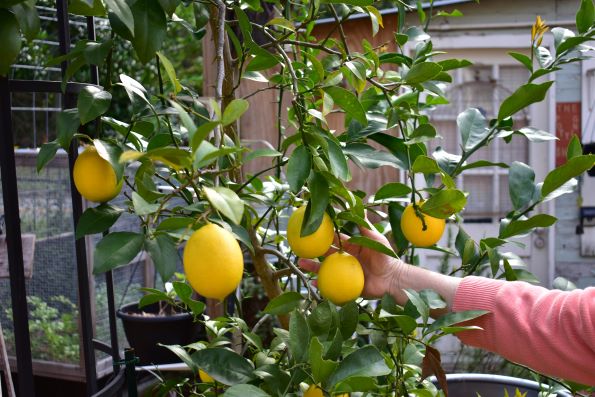 Managed to keep the lemons from freezing.  Let me tell you , that was a very cold day out wrapping each lemon on the top then a big wrap around the mid to lower part. Soon they will be ready to harvest. 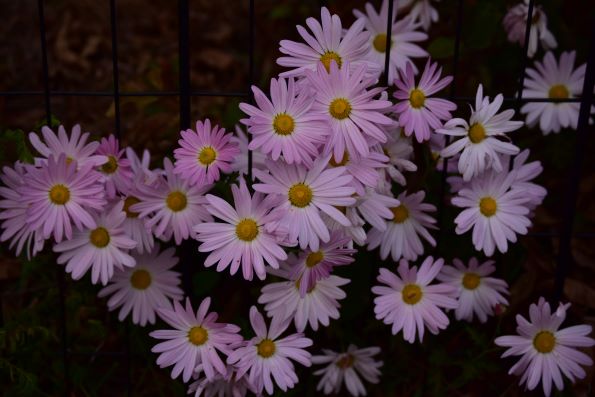 The heirloom Chrysanthemums are just vibrant and this is after the freeze. 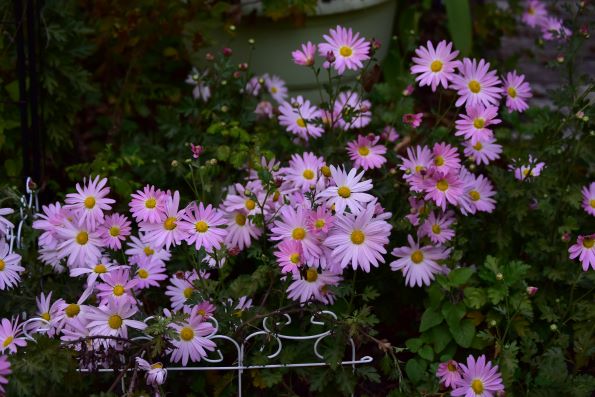 I keep dividing these each year and spreading them around the yard.  This is how my Grandmother did her flowers. 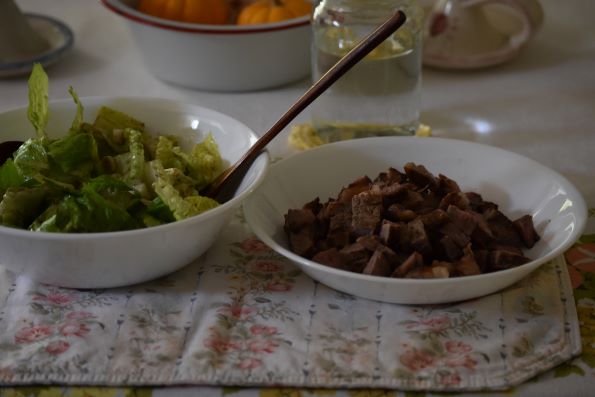 I want to let you know that my website will be getting a update. My son informed me that it needs to be moved to a new server and I will have to learn a new program and the internal admin will be different.  He came over the other day to see what he could do with my camera and computer and thankfully it is not just me having problems as it is the computer and outdated website.

I am not sure when this is going to be done but I wanted to let you know if I go missing do not worry. I will be putzing around here at home.  If I do not get another post in before Thanksgiving I would like to wish you all a very happy and safe holiday.  Grandma Donna

Around the house first part of November