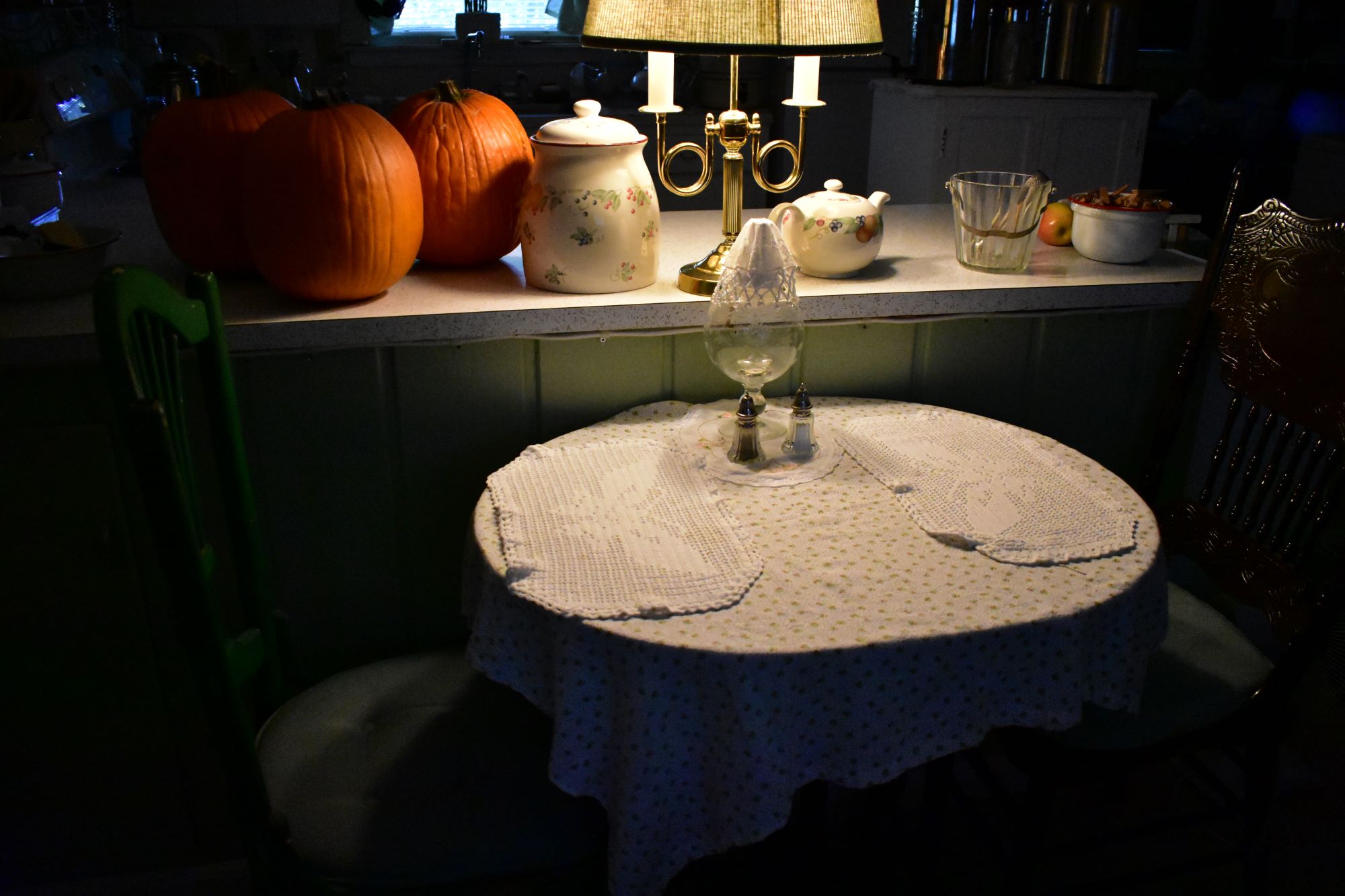 It seems that wherever we live in this world food prices are increasing.  I would like to point out that increased prices are not just where we live our friends around the world are feeling it too.

The holidays are nearing, we just finished up Halloween and Fall festivals are going on here where we live. It is getting time for the busy holiday season.

During holidays food is often used as decorations, pumpkins, popcorn, citrus, cranberries, root vegetables. With the price of food today we should make sure to not waste food so make sure to give this food a second chance and use it before it goes bad.  Either cook it in soup, feed it to animals, use it for compost to make dirt to feed good compost back to your garden or lawn.

My neighbor next door had family visiting the last few weeks and they were here for Halloween.  My neighbor Sarah, asked me if I would like some pumpkins.  I was happy to take them and I will share with you what I did.

The food banks would love to have these winter vegetables too so don't forget them. 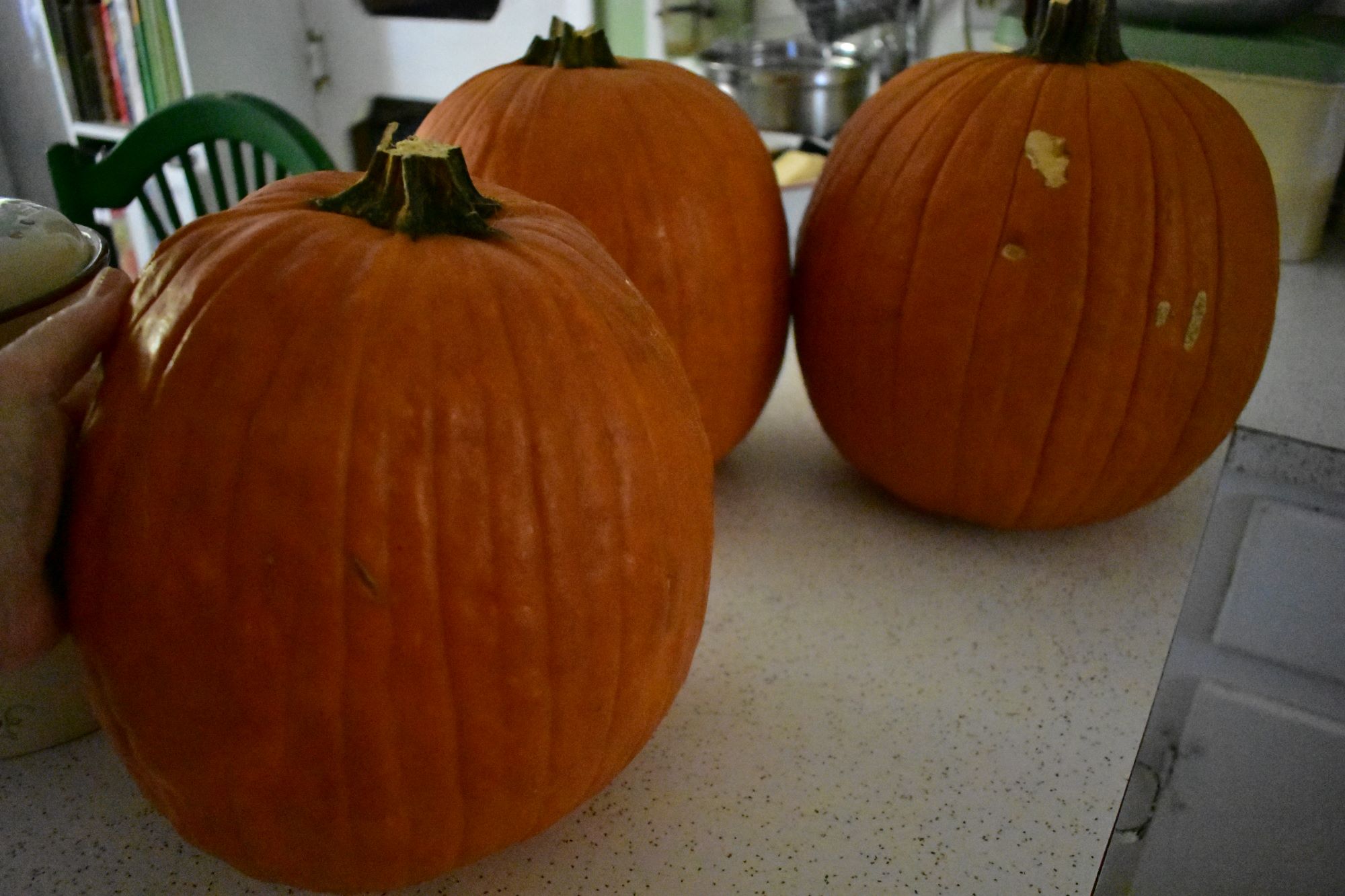 These were rather large pumpkins. 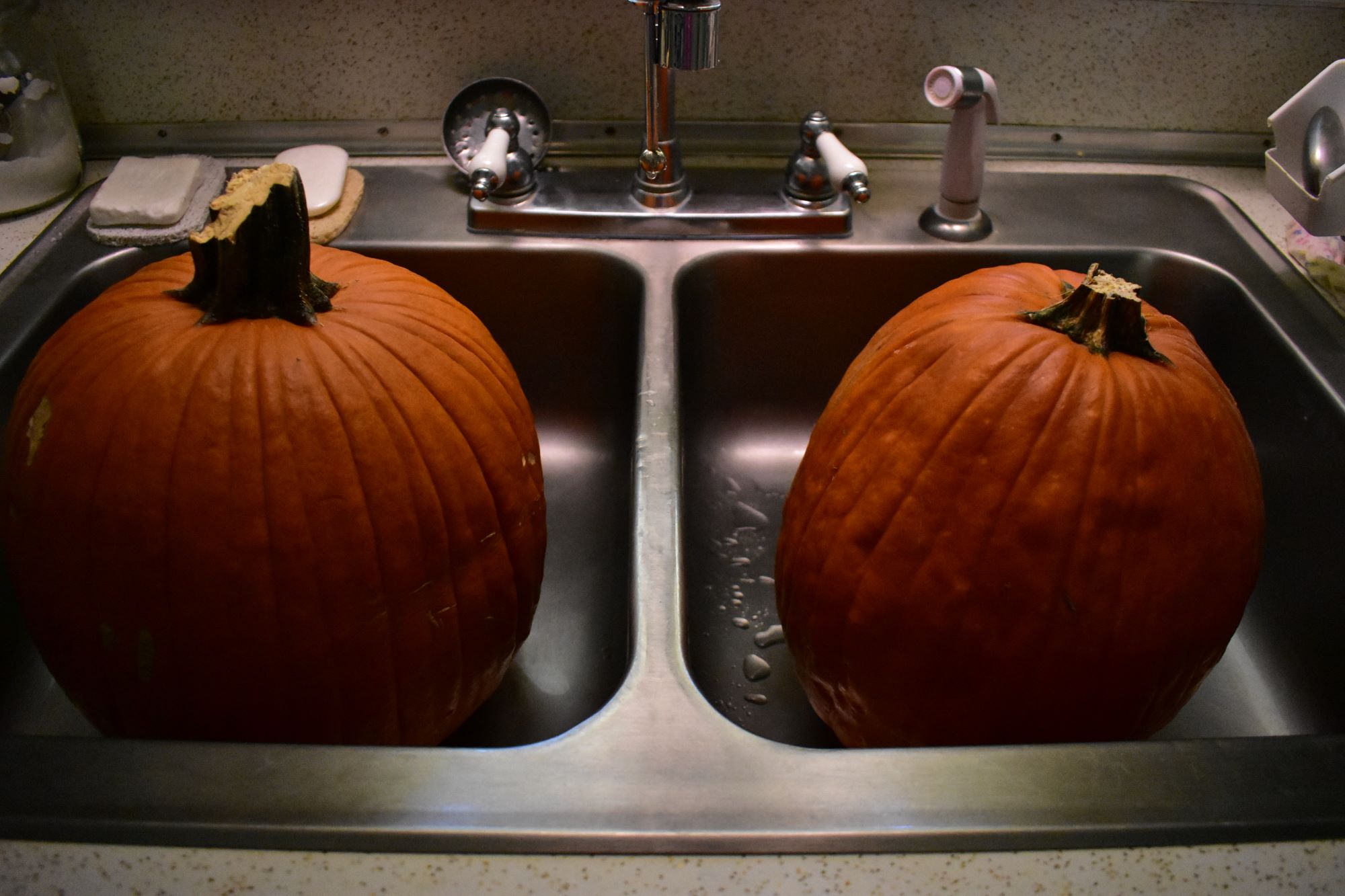 I gave my sink a good scrubbing and then the pumpkins got a bath. 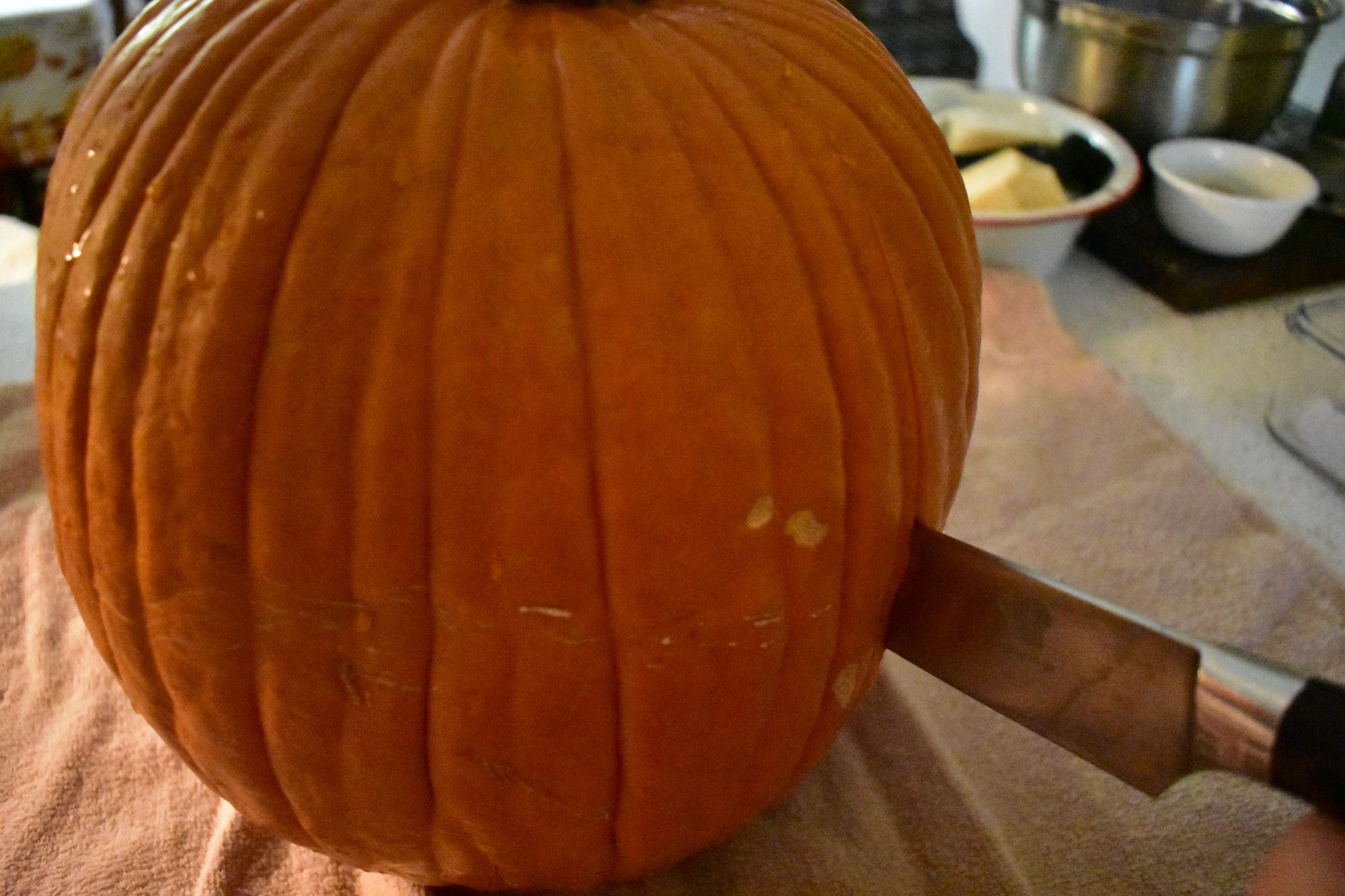 I took an old towel to slice the pumpkins. I cut off a third of the pumpkin.  If you pierce the pumpkin with a strong knife it is not difficult to slice because it is hollow inside. 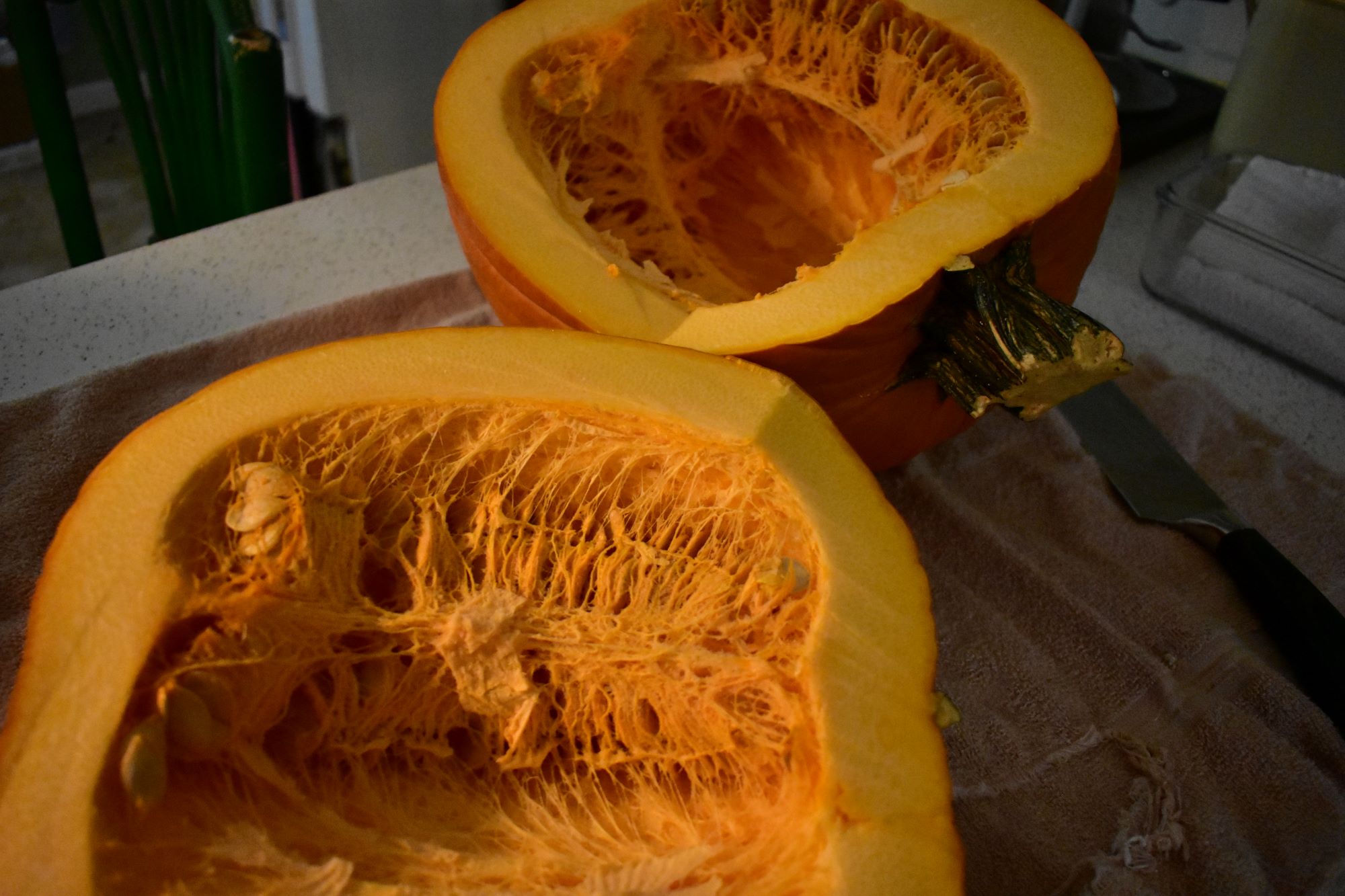 Now we have two parts a lot of stringy stuff and seeds inside. 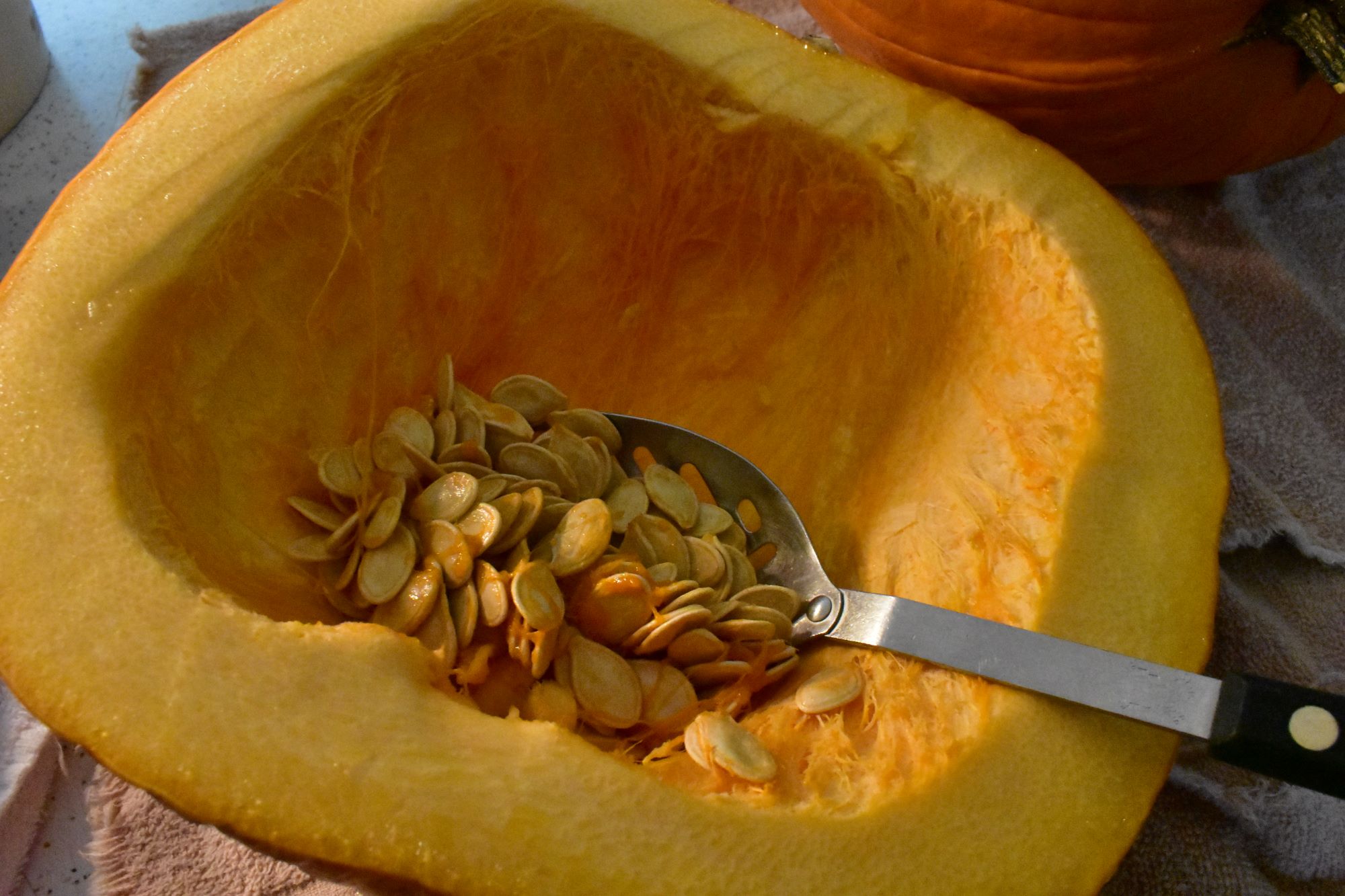 Scoop out the seeds and stringy stuff but you don't have to worry about what does not want to come out, it will bake along with the pumpkin. 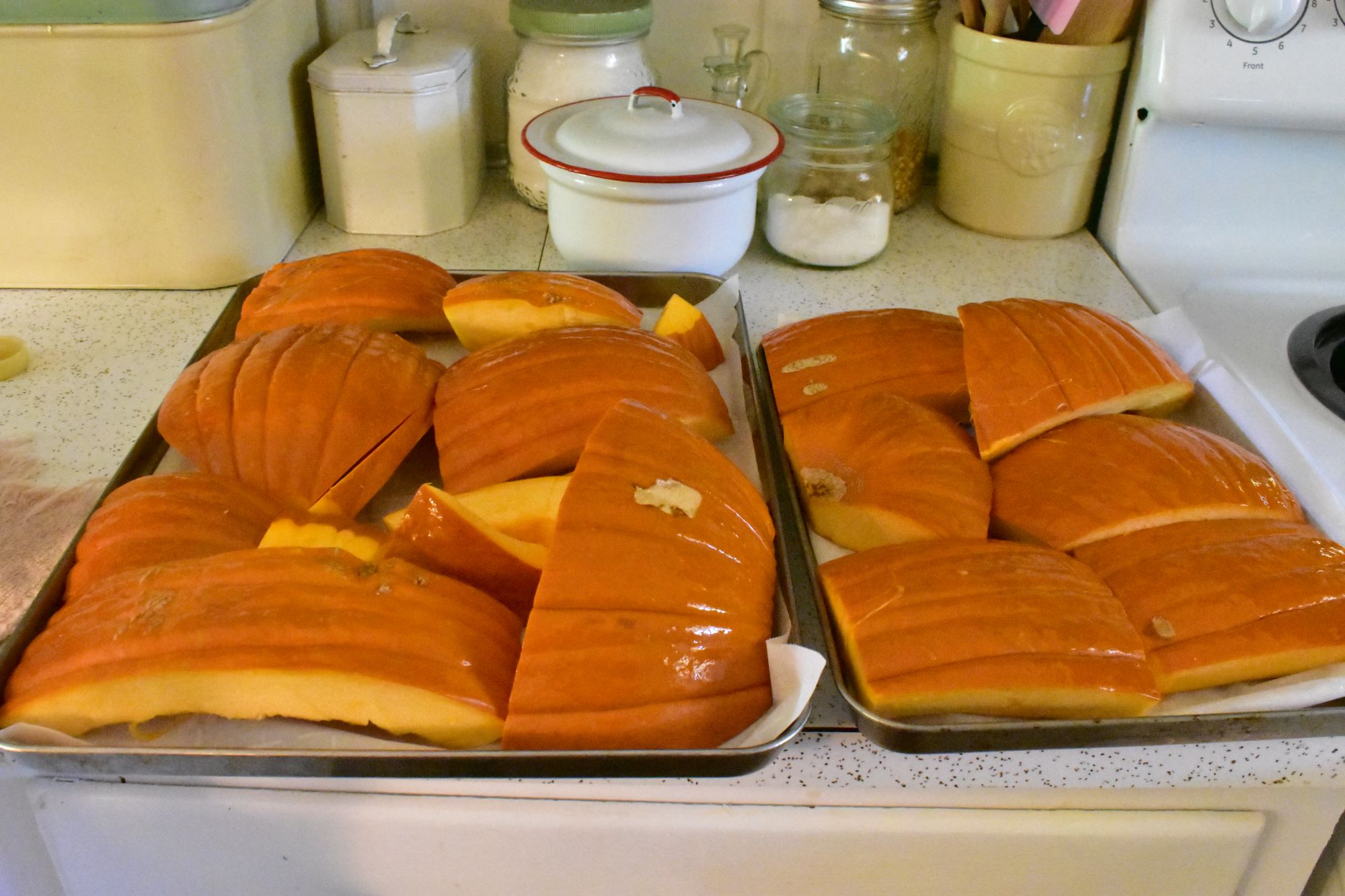 You can slice the pumpkin like this if you have weak hands and need to handle smaller pieces.

Rub a little oil over the skin just to keep it moist so it is easier to peel after roasting. 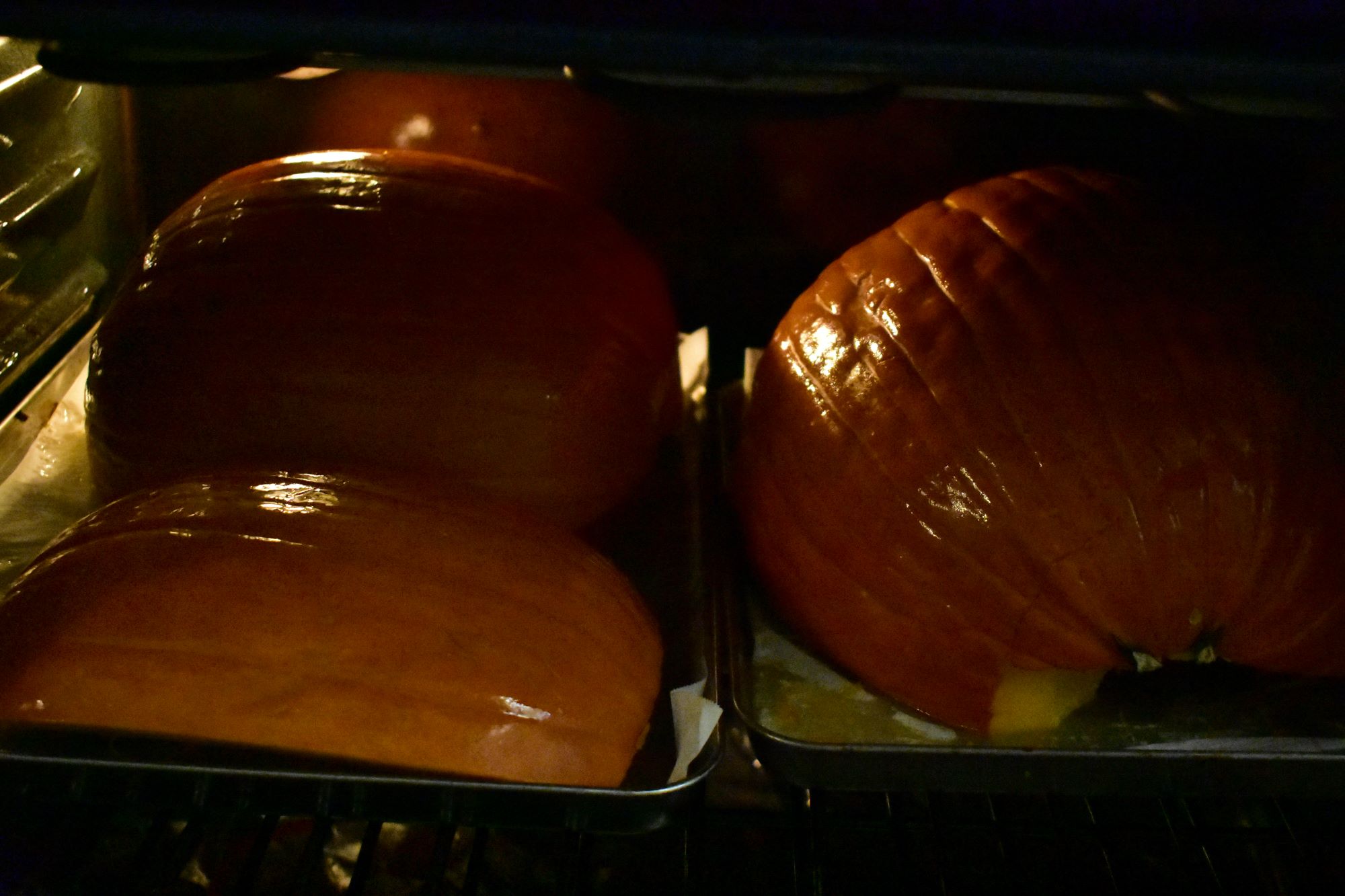 You can also roast it in larger pieces doing the same with oil.  I laid parchment paper over my pans but you don't have to do this if you do not have parchment paper.

I roast mine in the preheated oven at 350 degrees for about an hour or until it pierces through the thickest parts. 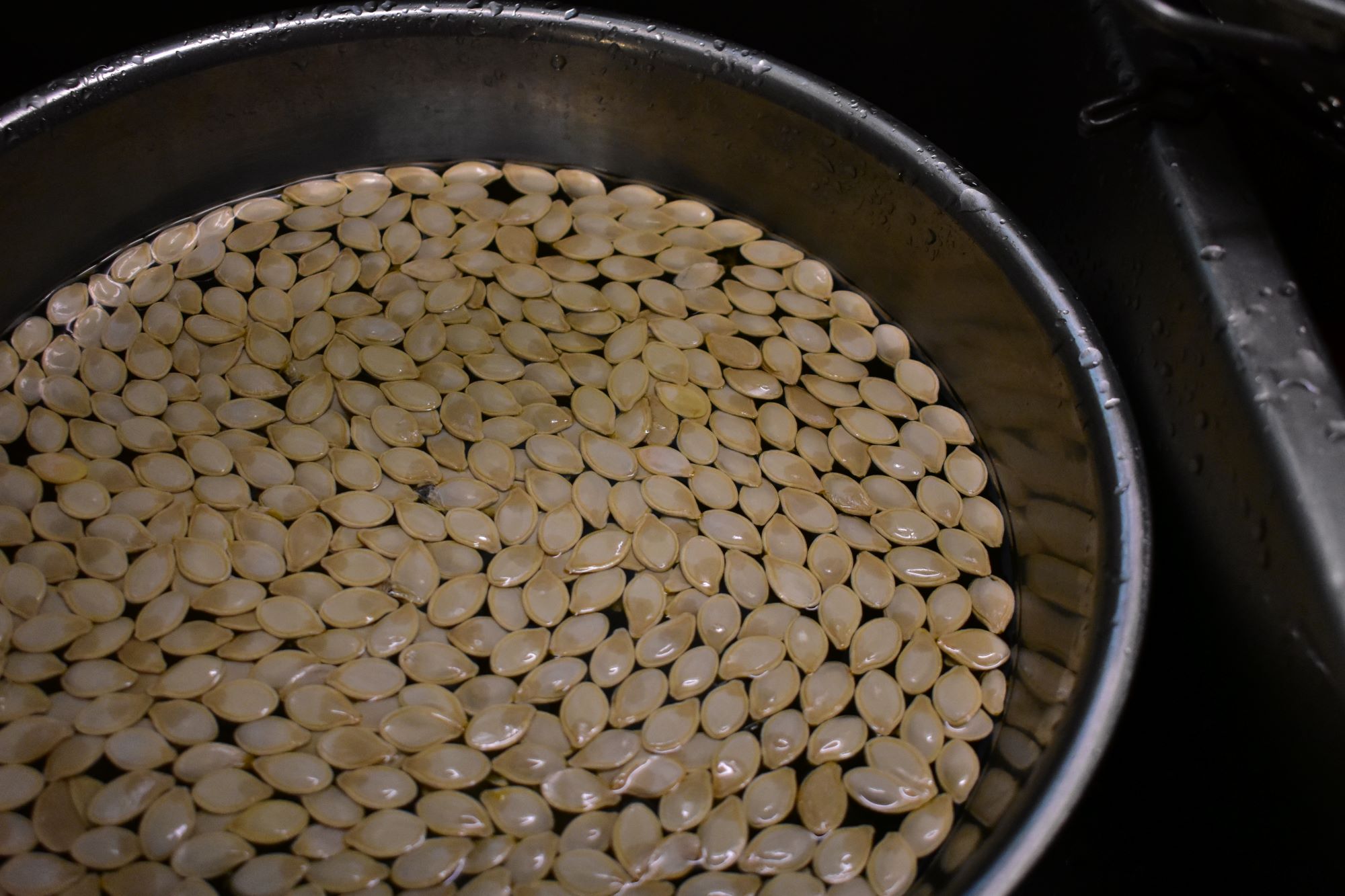 While the pumpkins are roasting, put the seeds in water and they will float to the top.  Some will remain attached to the slippery parts but a little effort they will come off easily. 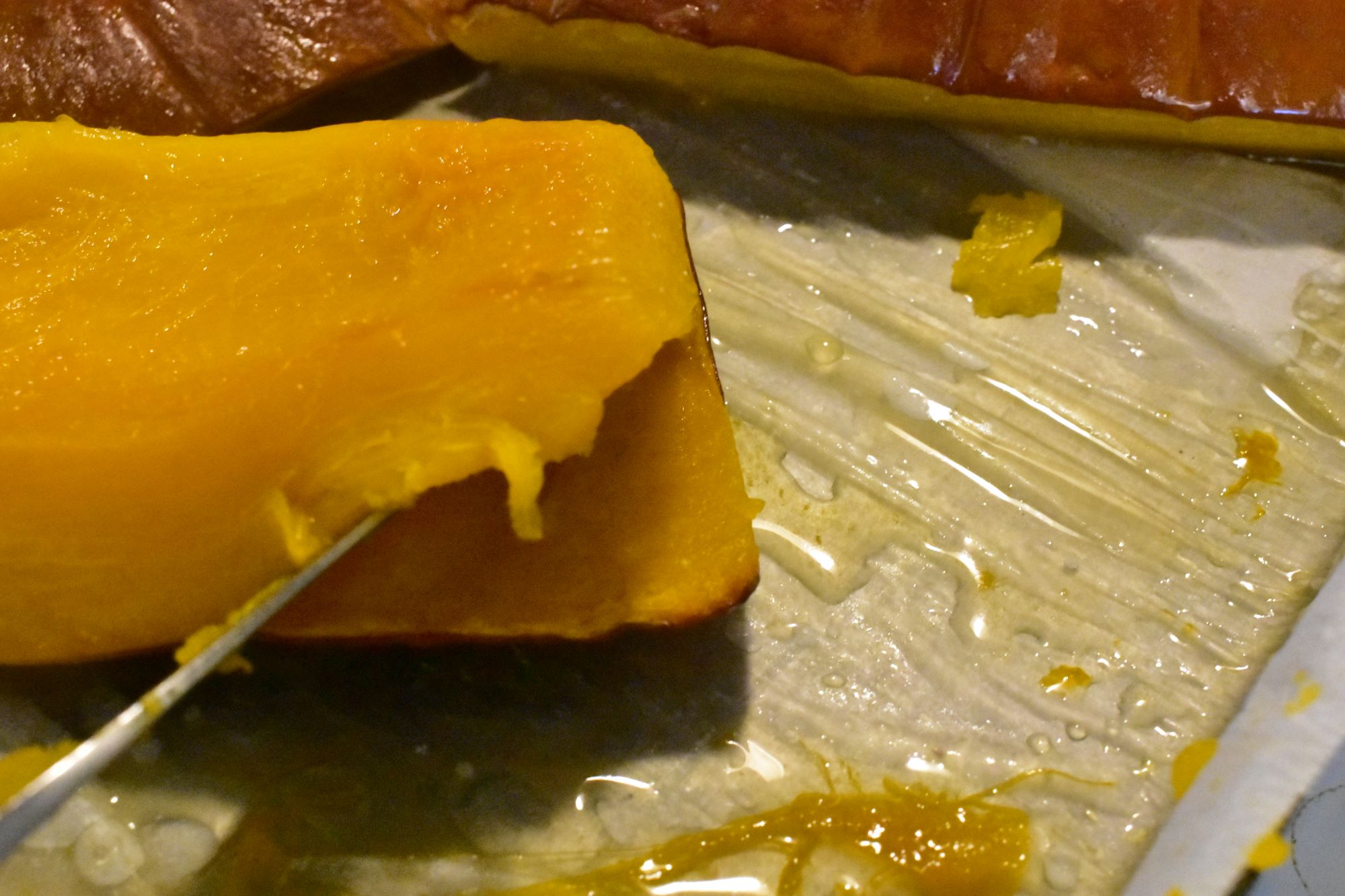 Separate the skin from the pumpkin while it is still very warm so it is easier to come off.  I use a knife and filet it off the skin. 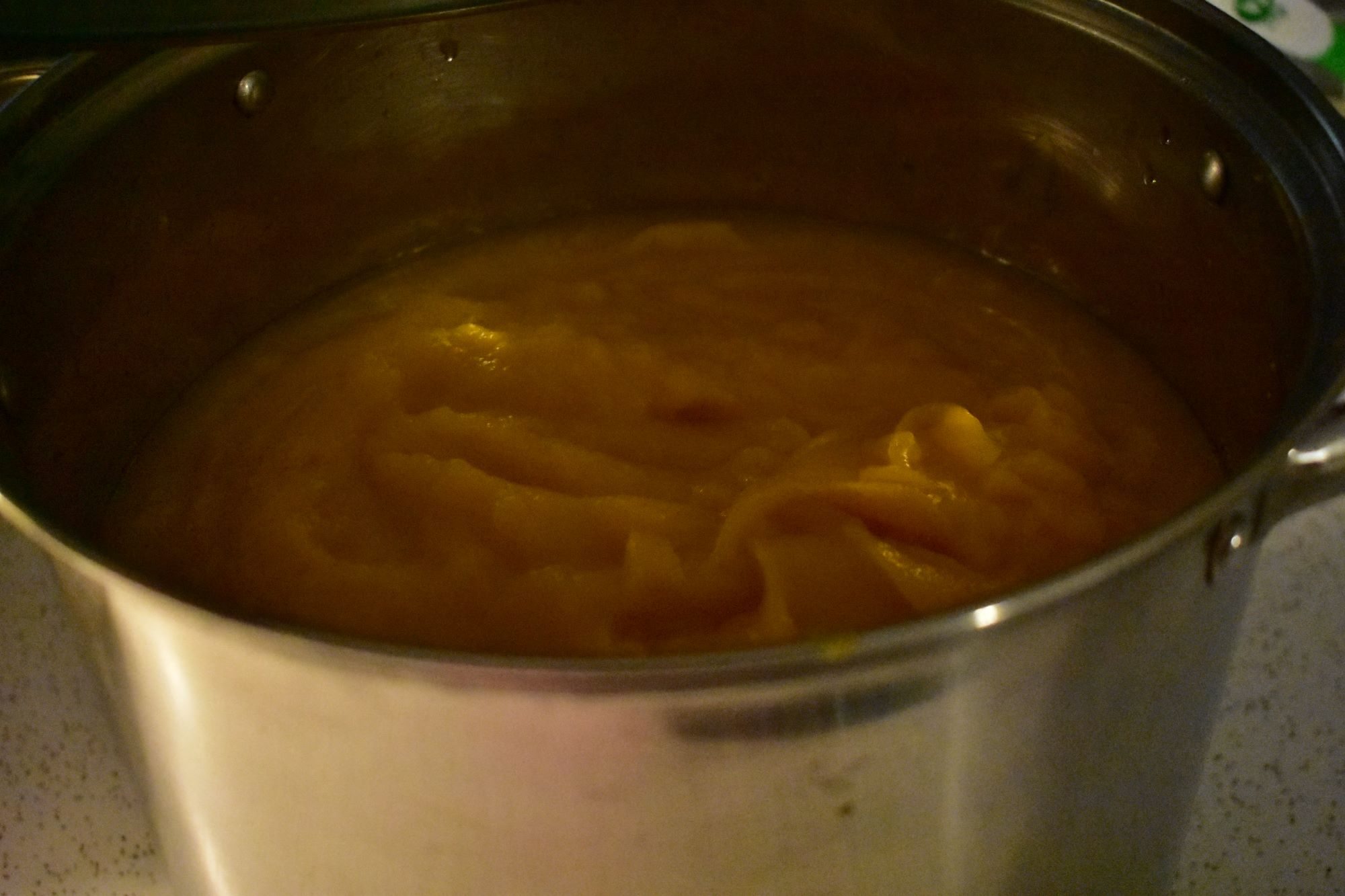 It was a bit messy and I had to bake the pumpkins in three sessions in my oven due to the size of three pumpkins but I did that and removed the skin and then put it all in a large bowl and then I pureed the pumpkin and when finished it filled over 3/4 of my largest stock pot.

To keep this real as they say, I have never roasted three large pumpkins the same day so this will take several hours if you ever decide to roast this many or more.  I am sure those of you reading this that grow many pumpkins probably have some kind of routine doing this many or more.

I was going to can the pumpkin but our national food preservation says that freezing pumpkin will give you the best flavor and so I chose to freeze this so it has the best flavor.  I still could dehydrate some if I choose as my friend Catherine reminded me. 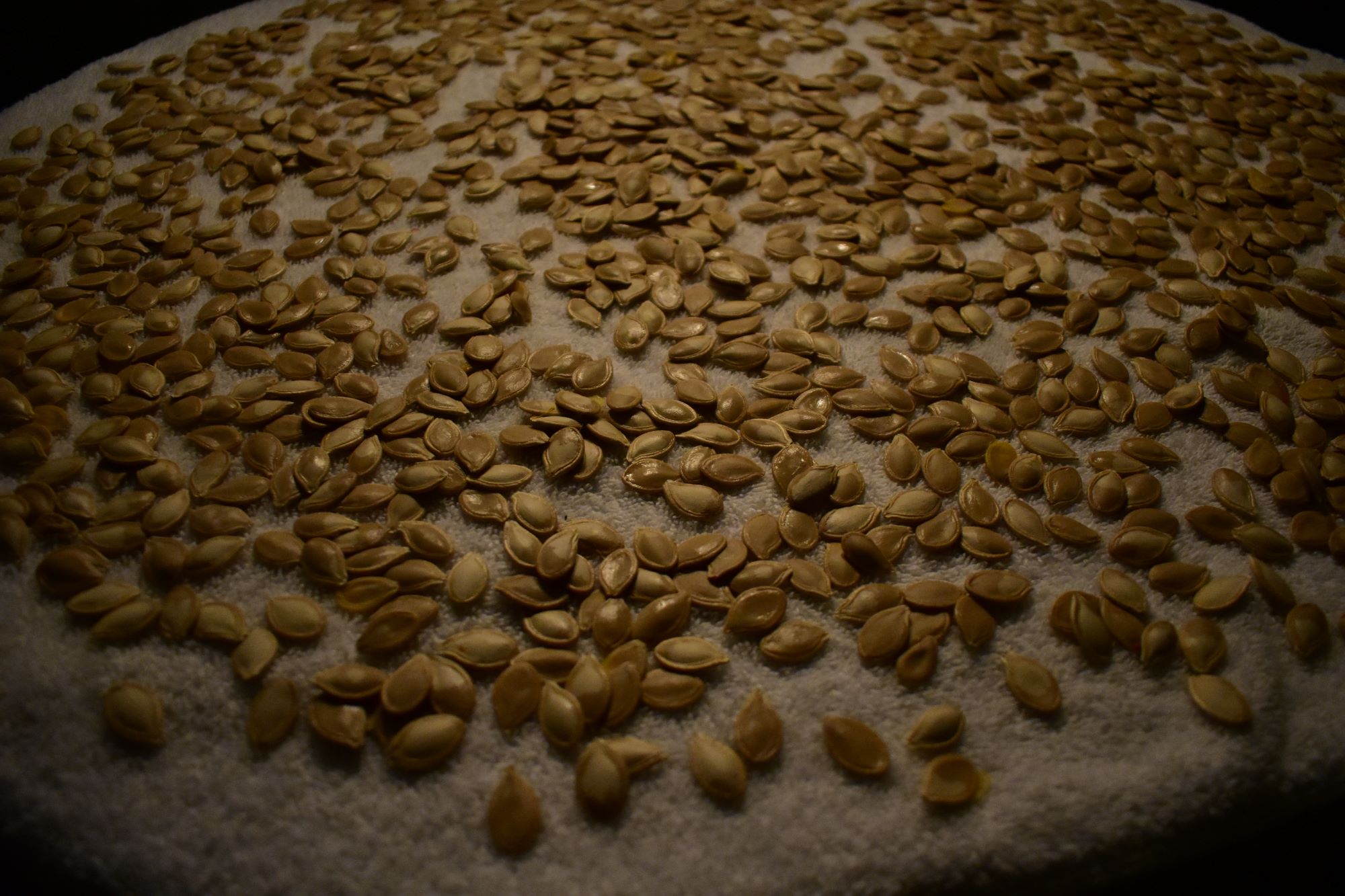 I chose the boiling method for the seeds, and boiled them for ten minutes and drained them and laid them on a large towel to dry overnight and then roasted them the next morning. 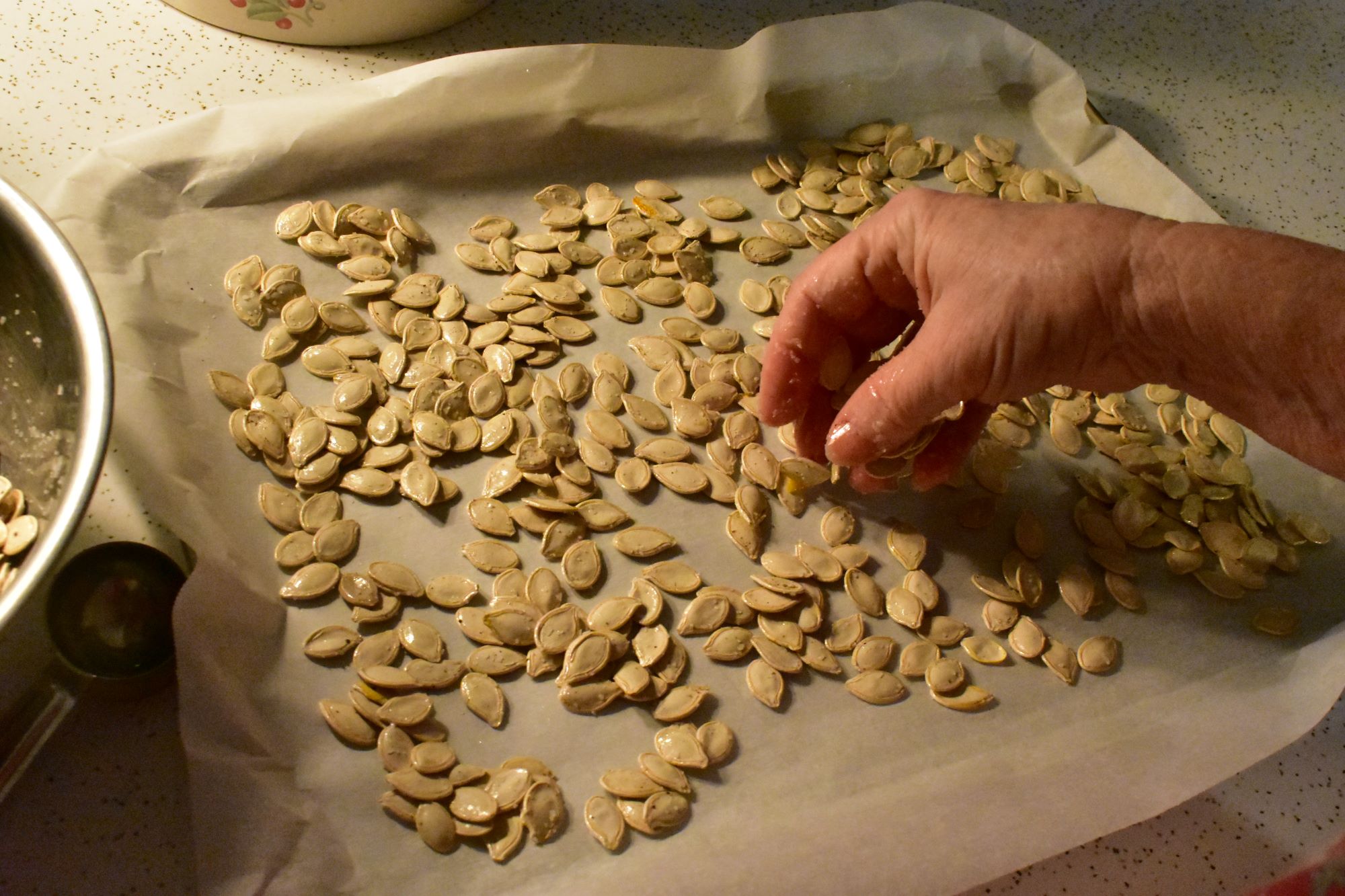 Roasting pumpkin seed is very easy, just put them in a bowl with a little oil, not too much, just enough to dampen them with oil.  I use light olive oil and kosher salt and pepper.  Then place them on a pan or pan lined with parchment and bake at 350 degrees for about 20 minutes but keep a check from 15- 25 minutes (watch them close so they do not burn).  There were a lot of seeds so I put some in the oven and took them out and then another batch because I wanted them loosely in the pan so they could toast evenly.  These can be very addictive, that salty crunchy factor. There are many ways to season pumpkin seeds, we like them with salt and pepper. 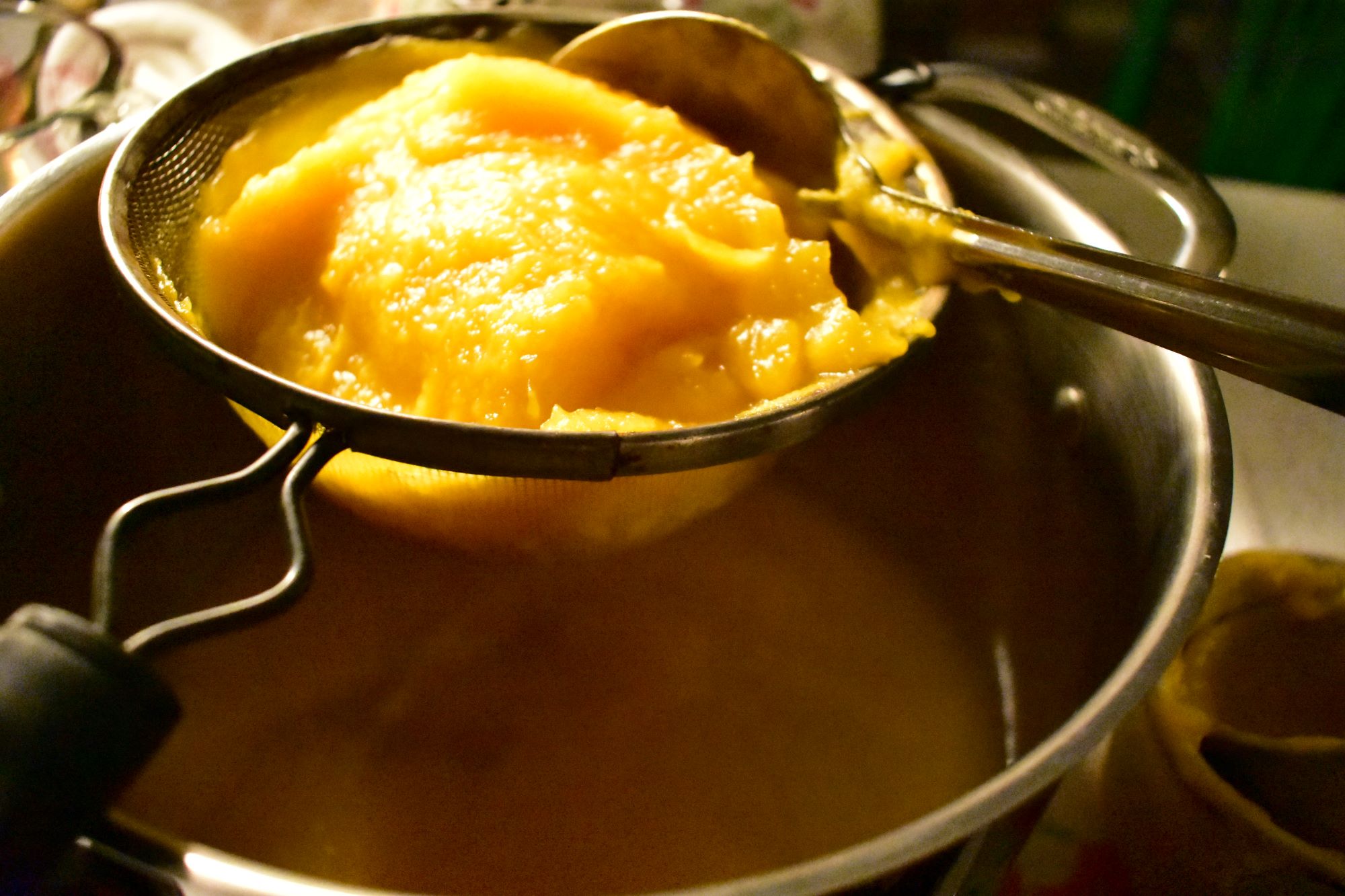 The pumpkin puree should be drained if you are using it for pumpkin pie or pumpkin bread so the moisture count is not too high. 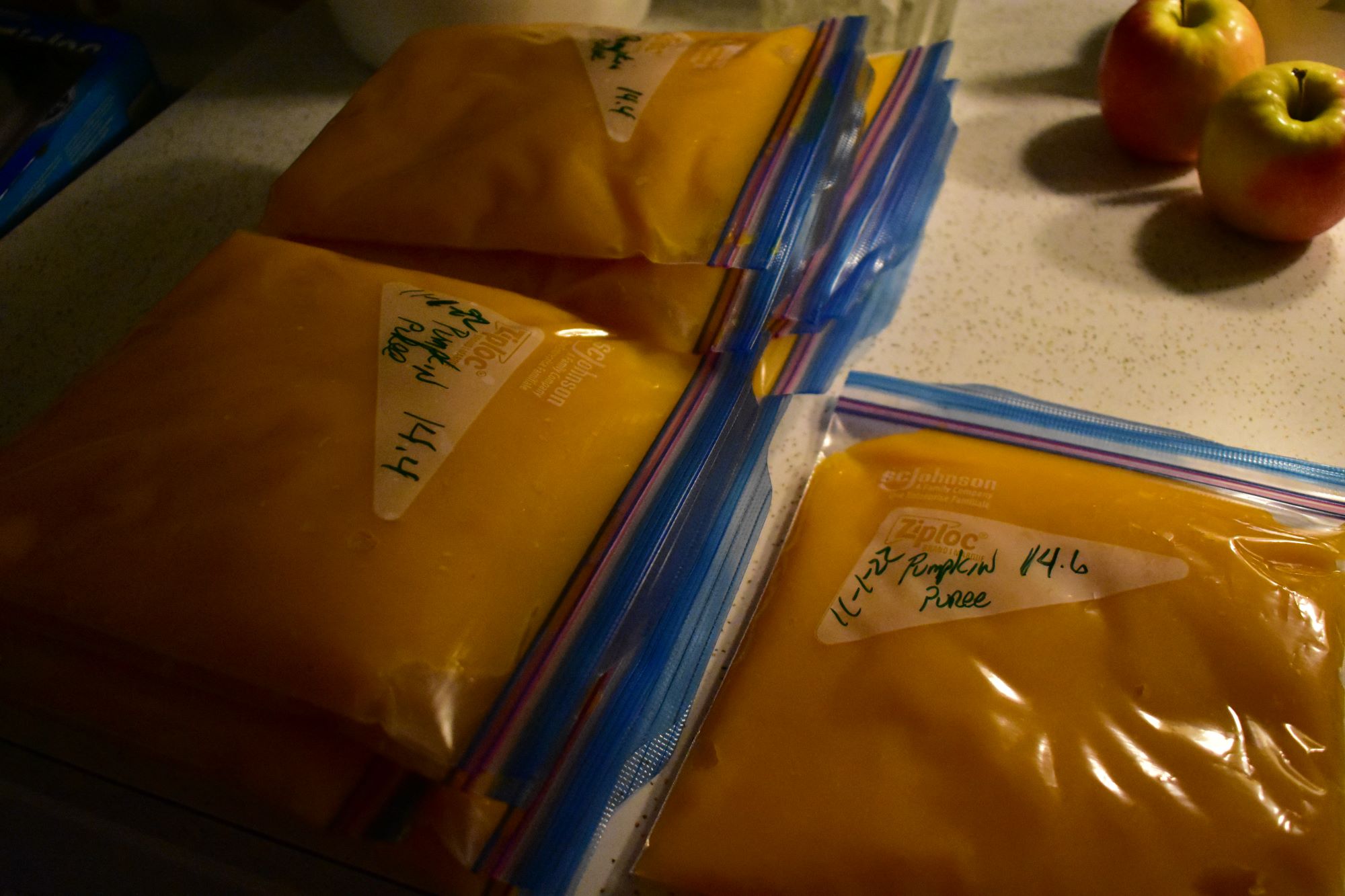 I did not have enough freezer boxes so we picked up some freezer bags and weighed the bag and wrote the ounces. I would have canned these in 1943 but this was not planned for so I took this option in our real year of 2022. 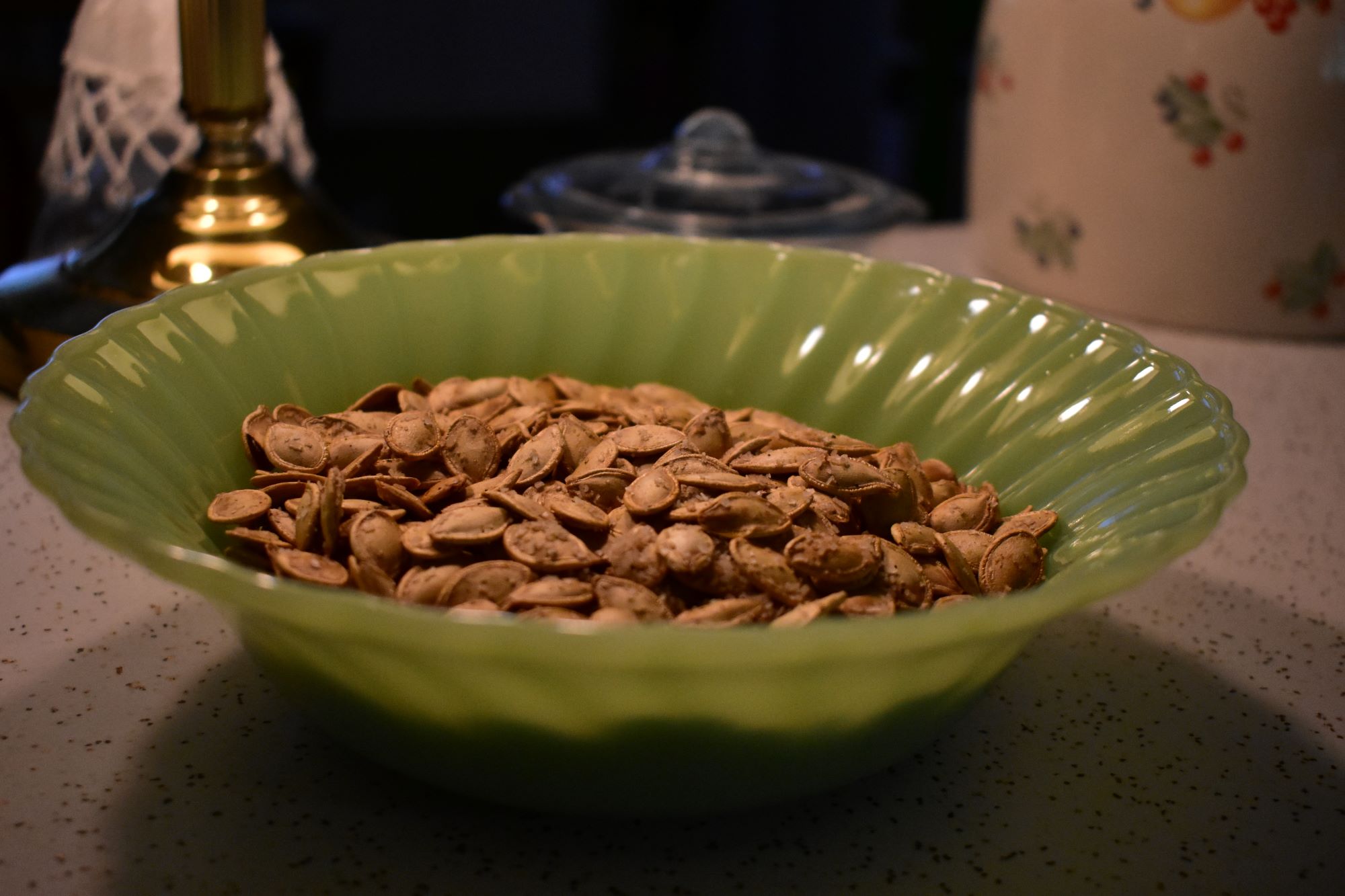 I welcome you to share your pumpkin thoughts, ideas and recipes in the comment section below.  Your comment will show once I have read the comment, please do not send links to online recipes.

Thank you Sarah for the Pumpkins, I will share the love with some pie and bread coming your way through the holidays.

This article has 27 comments